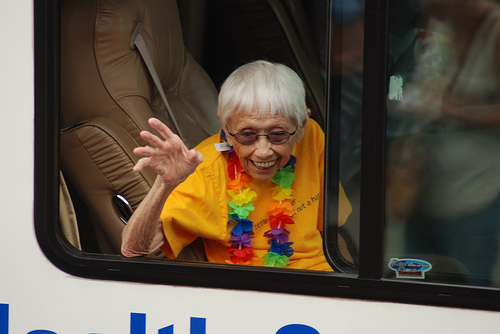 The parade was fun. It actually seemed to start on time this year, though there were several long gaps where nothing was coming down the street causing the crowds to gradually enroach from the sidewalk to the street. Several dozen pics on Ron’s camera that is at his place so I’ll try to get those up on Flickr in the next day or so. Overcast gave way to sunlight and I got a sunburn and a nice pattern of my tank top burned into my shoulders.

As always, Dykes on Bikes remains the perrenial favorite. And as always, PFLAG, the veterans and the teachers always moves my heart. The loudest screaming was as a peace activism group went by with huge banners demanding a stop to the war and impeachment. Much agreement with that.

We got to the gym late and missed seeing all the guys pumping themselves up for the floats. That’s always fun. And so today is the slowest day of the year at the gym as everyone is hung over or still tweaking from a long weekend of revels. We came down Halsted after dinner just to gawk at the crowds and blocks-long lines for all the bars. By then the streets had been swept and it was like the parade was a distant memory.

The next big holiday (aside from the 4th) is the Market Days street festival which is like the parade but inside a concentration camp – it doesn’t move. It is the one time a year I get to eat funnel cakes so I am looking forward to it.

I couldn’t sleep readily last night (we’d had a long post-parade nap) and I just sat up thinking about Cheney’s claim that he is separate from pretty much the entire government and I wonder what he is hiding and that I probably obsess too much about this stuff but it is like you can’t believe it when you turn on the television each day and another step towards authoritarian control has installed itself maybe not for immediate use but another step that will be very difficult to take back.

Much up in the air with work. This server move seems endless and has continual setbacks. June has been a very molasses-esque month. It feels like everything technical has been twice as hard to do. Maybe it is the humidity that makes it feel so slow and labored.

Until I get our pics up you can browse the Flickr pics of Timothy, EMR, Cargo Cult Science, Gerald, Cynical Idealist, Evan, and Troy.