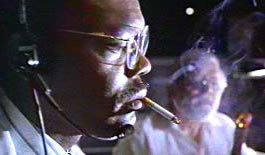 Three days left. As Samuel Jackson says in Jurassic Park: Hold on to your butts!

Making Votes Count: Is a Theft of the 2004 Election Already Underway?:

From U.S. soldiers being told to use non-secret ballots to the Pentagon counting the votes of the military and U.S. citizens living abroad. From partisan secretaries of state overseeing the election to Homeland Security preventing new U.S. citizens from registering and much more.

Also: Racially-Based Suppression of the African-American Vote: The Role It May Play in the Upcoming Presidential Election

[I]n legal briefs filed in connection with cases in Ohio, Michigan and Florida, the administration’s lawyers argue that the new law gives Atty. Gen. John Ashcroft the exclusive power to bring lawsuits to enforce its provisions. These include a requirement that states provide “uniform and nondiscriminatory” voting systems, and give provisional ballots to those who say they have registered but whose names do not appear on the rolls.

White House Chief of Staff Andrew Card said yesterday that President Bush views America as a ”10-year-old child” in need of the sort of protection provided by a parent.

In a last ditch bid to win Pennsylvania’s electoral votes, where Democratic Sen. John Kerry is leading is most polls, President George W. Bush has engaged in mailings which contain myriad graphic images of the burning World Trade Center on the morning of Sept. 11, 2001.

Bush Wanted To Invade Iraq If Elected in 2000:

Two years before the September 11 attacks, presidential candidate George W. Bush was already talking privately about the political benefits of attacking Iraq, according to his former ghost writer, who held many conversations with then-Texas Governor Bush in preparation for a planned autobiography.

At a campaign rally, Republicans recite the “Bush Pledge.”:

Embeds bite Bush in the ass

News crew in Iraq shortly after the fall of Saddam Hussein was in the area where tons of explosives disappeared, and may have videotaped some of those weapons.

Ohio Lawmakers Call for Secretary of State Blackwell to Resign

Several Ohio Democratic Senators are calling for the immediate resignation of Blackwell, stating in a letter addressed to him that he has been “unresponsive to the needs of Ohio’s voters” and has “failed to uphold [his] duties as chief elections officer.”