Got up this morning and opened up the automatic updated CSPAN/AP map (quiet a snazzy little web app) and uttered: Oh my God.

Ron and I sliced up brie, veggies, fruits and Jake joined us with cookies. So we spent turns rocking on the floor mumbling panicked and playing with the kitty that Jake thought I had named Astroglide. I never thought of naming the cat after a personal lubricant.

As reports came in last night that youth (18-35) were not turning out to vote (stupids!) I became pretty much resigned to another four years in Bush’s America. In the end gross mis-management of nearly every major part of being President was not enough to overcome the Big Fear that those big brown, non-Christian, gay-loving, ‘not-like-me’s were coming to get us. I guess you really can never underestimate the power of moralistic xenophobia.

As expected, the 10 gay marriage bans were also each elected, pushing the U.S. further from any concept of egalitarianism or tolerance or common sense. Don’t worry girls: Roe v Wade is next.

I can’t wait until we invade Syria and Iran. Then North Korea. This is exactly as planned and on schedule. And then after Christmas that 9-11 report will come out, Abu Gharib will blossom further and we’ll realize what a stupid mistake this all is.

I’ve always said today was merely a battle in a long war. The GOP built its electoral dominance over 40 years by building a massive, well-funded message, training, and media machine. We started putting ours together last year. Regardless of who takes that oath next January we still have a war to wage. We won’t wage it with violence, but by building a solid foundation for a new progressive movement.

Update: Vote error #9 – received by a voter on an electronic voting machine. 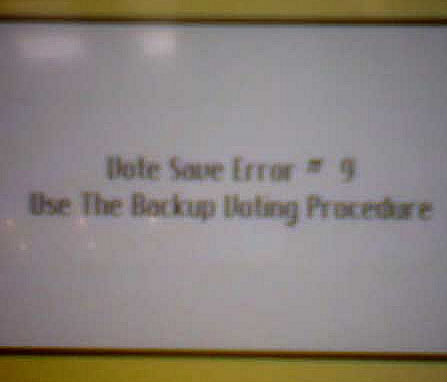