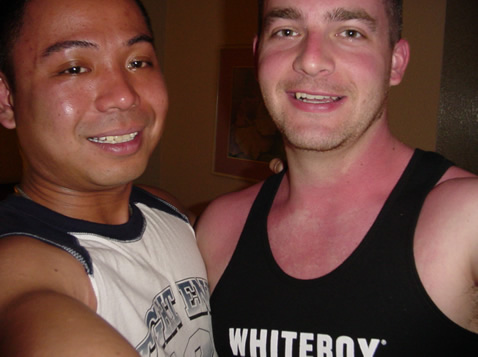 I am happy to report I attended my first circuit party last night. The Maui AIDS Foundation’s Volcano weekend where 100% of the proceeds go directly to caring for HIV+ people in Hawai’i. Their promo brouchure also detailed that they felt the circuit scene needed a reboot of spirituality and focusing on the charity and the cause rather than a producer’s coffers. Very happy to read that.

Ron and I had gone tank top shopping before we left Chicago – a sassy shirt is always required. Mine said WHITEBOY on the front, a rebel clothing brand and on the back it said FUCK ALL Y’ALL – I thought a fitting sentiment. Ron’s was a sleeveless shirt that said TIGHT END. The event started at 8 and went until 3 so we thought we’d show up at 10.

Breakfast that morning was at a divebar where I was turned on to a side of steamed rice with my eggs and sausage – considering myself so continental was short-circuited by the fact that probably one quarter of the world’s population eats rice for breakfast every morning. Ron had eggs and spam. I had never considered that the distance from the mainland to Hawai’i means beef and dairy products are very expensive.

We spent the day at the beach where I got my first sunburn of the summer season. I hadn’t applied sunscreen (SPF 50 for us pasty German-Irish Catholics) until we got to the beach so I was pretty burned on my shoulders and upper back. Read some more of Brave New World while I soaked up the sun with periodic trips into the cold water floored by suprisingly sharp rocks. We were at the area of Waikiki dubbed Queen’s Beach surrounded by over-tanned beefy men and pockets of clueless Europeans. Lunch was at the Cheesecake Factory (the super-yum Luau salad with chicken, mango dressing topped with layers of fried won-ton
). A bit of shopping around and a bonus T-shirt find at Armani Exchange where we were waited on by Mr. Sexy Handsome Asian Man (who would turn out to be one of the beaus of the ball that night). A soothing view was a shopping center with a walk-in aquarium built in with schools of fish, 2 sharks and some stingrays thrown in for good measure.

Back home we dressed for the event and arrived at 10. The event this year was held at the Hawaii Convention Center.

We cabbed it to a massive, cavernous and pretty much empty exhibit hall. Wow. I was floored. Well-lit totems graced the entrance and a huge grid of lights hung over the DJ pumping out a thunderous quality mix. And there were about 25 people in attendance. I started to worry for the producers and thought that perhaps Ron and I should have shown up even later – though wasn’t 2 hours not fashionably late but obnoxiously late? Evidently not.

A lukewarm performance of a couple doing some kind of booty dance from a suspended steel ring was poorly received. Another couple did a – I don’t know the official name for it – it’s not adagio – it’s when you suspend from long strips of fabric and do all sorts of twists, slides and suspensions – that was more impressive.

Mister Armani Exchange was there with his posse of fellow beefy tattoed asian men. The crowd was predominantly asian or white with pockets of black, latino and Other thrown in to boot. The convention hall never reached full capacity which was strange – I wonder if this is the kind of reception they have every year or if something changed this year. I think if they had halved the space it would have really helped the event to corral the crowd more. The first few hours we were there were like a middle-school dance where few are dancing and the rest are staring.

I thought they could have had some better staging elements as well. The backdrop was a large flat painted as a volcano with a smoke machine behind belching stage smoke. I thought it would have been cool to light that in intetersting ways for the different performances – or have it move or slide or fold down to reveal things. It seemed like a good ‘training wheels’ circuit party for me. I had a great time but it didn’t have the magnitude that I usually associate with these events.

We danced for about four hours and retired back to the hotel around 2 (7 am Central!). I can’t sleep right now, I think because of the caffeine I imbibed to stay awake. The afterhours event that followed the dance party actually just ended a now. There is a pool party this afternoon – we aren’t sure how late we should go to get there at the right time.

Bit by bit, the curtains in the windows of the rooms of the hotel across from me start to draw open. It is overcast this morning. Alove vera is the word of the day today for me. The backs of my legs were burned the most. I am SPF’in before I leave the hotel this time. I hope to get to Starbucks today and post all this stuff to the blog.

As I’ve blogged before – I like dance music that is less than optimistic. I shy away from club songs of peace love and harmony and would rather something edgier and darker. I spent part of the night concocting my party on an imaginary stage replete. Maybe a performance by a taiko drum dojo or sort of strange shocking imagery. Something less than happy. Or maybe funeral keening in some foreign language. Something more other-worldly.

The morning rains have come off the mountains.