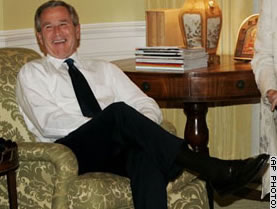 Updates – I’m gonna post fun quotes and reactions here over the next day or so: (the first set from MeFi)

Americans could fuck up a baked potato.

Remember that, with a Republican President, a Republican Congress, and a right-leaning Supreme Court, they have no one to blame but themselves when it goes to hell due to a falling dollar, rising oil prices, and flat-lining foreign investment.

I called my dad, a man who’s spent many years fighting for good things. “Get over it,” he said, “The way you feel now is exactly how I felt when Nixon won a second term — crushed. I couldn’t believe America was that stupid. But remember what happened to Nixon that term.”

I’m glad that Americans seem to be more concerned with not letting gay couples share their health benefits than not destroying the world.

Just be happy with the monster you and the rest of the Cult have created at 1600 Pennsylvania Avenue tonight. Because he’s all yours.

One thing that is very strange is how much the exit polls differed from the final results, especially in Ohio. Remember that Ohio uses Diebold voting machines in many areas. These machines have no paper trail. Early in the campaign, Diebold CEO Walden O’Dell, a GOP fundraiser, promised to deliver Ohio to Bush. He later regretted having said that.

We put together an unprecedented ground operation, but it was matched by the zealots on the right. We put forth quality candidates in races nationwide, only to see most outclassed and outgunned by a GOP which ran on three simple tenets: God, guns and gays.

And yet every time a Republican steals another election, we get lectured on how we have to just put it behind us and work together for the good of the country and not make waves and try again in 4 or 8 or 20 years. Bullshit. It’s time to borrow a page from the Republican playbook. Sue. Investigate. Entrap. Scandalize. Obstruct. Delay. Accuse. It hasn’t hurt the GOP any with the voters, it won’t hurt us. 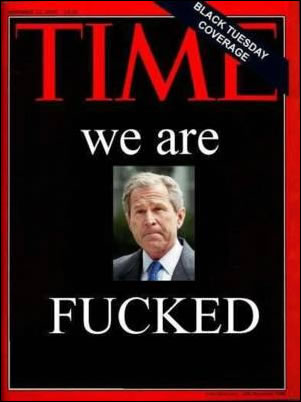