It has been a fun weekend. Last night Ron and I ended up throwing in my air conditioners and watching movies all day.

We went to the gym in the morning (chest) and then had lunch at Ricebox and came home and broke out the power tools to install the air conditioners. We started to take a nap and then ended up watching Trick on the computer LCD panel in the bedroom. Ron loves that movie. He has Coco Peru’s monologue memorized (‘It burns!’). Then we threw in the copy of Reefer Madness (the musical) that I’d bought at the video store – it was 5 for $20 and I figured it would cost $4 to rent it so why not just buy it. It had Christian Campbell (who has played the same role in the musical from LA to Off-Broadway to the movie version) who is also in Trick. The movie also stars Alan Cumming, Neve Campell, Ana Gasteyer, Kristen Bell and Steven Weber. It’s got some fun jokes and songs but suffers from the ‘too many verses’ syndrome of most musicals on film – where the characters are stuck singing verses that would be more electrifying on a live stage than constrained by a television box. Ron nor I had seen the original 1936 film Reefer Madness – a educational/warning film about the evil Marihuana coming to undo our youth and enslave them. Its nice to know that ‘What about the children?’ panic is older than dirt.

We got a pizza and then watched Stepford Wives, which I’d also bought at the video store. It is written by Paul Rudnick who wrote Jeffrey and The Addamms Family movies and has a stellar cast. Plus, the girlfriend of roommate of Christian Campbell in Trick is in the movie as one of the wives (‘That’s because her name is Claire.’). I still like the twist of this remake at the end. I really like Roger Bart’s acting and still need to see him in The Producers movie.

We eventually went to sleep.

This morning we went to the gym (back) and then ended up at Chipotle for lunch. Came home and slept for a bit: Ron spooning me and me spooning kitty. Then Ron got home before the thunderstorms started up. There’s another set on the way right now. I really have gotten into the radar images on Yahoo weather. I like seeing exactly how far away the weather is at all times.

I like the white noise from the fans and air conditioners. I think it makes it seem even cooler here because you are insulated from the street noise a bit more with all these machines going.

Lately, when I’m sleeping alone, I’m really getting into having a pillow on each side of me, one on top of my chest, one under my knees and then one above my head like a headboard. I feel like I’m in a packing crate but I like feeling enveloped.

I’ve had lots of stomach gurglies this past weekend. Not sure what all of that is from.

We went to the International Mister Leather marketplace on Saturday. The brouchure said they have about 12,000 people go through there on Saturday and I believe it. We’ve usually gone earlier but arrived in time with the throng. You walk up into The Palmer House Lobby and are immediately greated with lots of leather – and that’s just the skin – I’m kidding. There’s hundreds (mostly men) of people standing around drinking and gabbing and generally gawking and yakking. We made our way to the registration line which took about an hour to get through. A had a delicious panic attack when we were in the middle of the line and they had a cordoned off maze where we had four layers of people on either side. Yeek. Eventually we made it out with our registration complete and made our way to the marketplace area.

The place was packed. The marketplace spanned two floors of the conference center and had at least five different rooms. It’s huge. The air was thick with the smell of leather and poppers and I was guessing a sociologist could measure the pheromones through the roof. What I always enjoy about IML is the complete harmlessness of rough (consesual, safer) sex – that there is such a sense of fun and frivolity in the leather community that they are all very friendly.

We ran into Jake who was looking quite ripped (though admittedly hungry) and David Cerda was working another booth. We also saw many guys from the gym and some of Ron’s buddies.

We saw Johnny Hazzard but didn’t run into Matthew Rush or Jason Adonis. 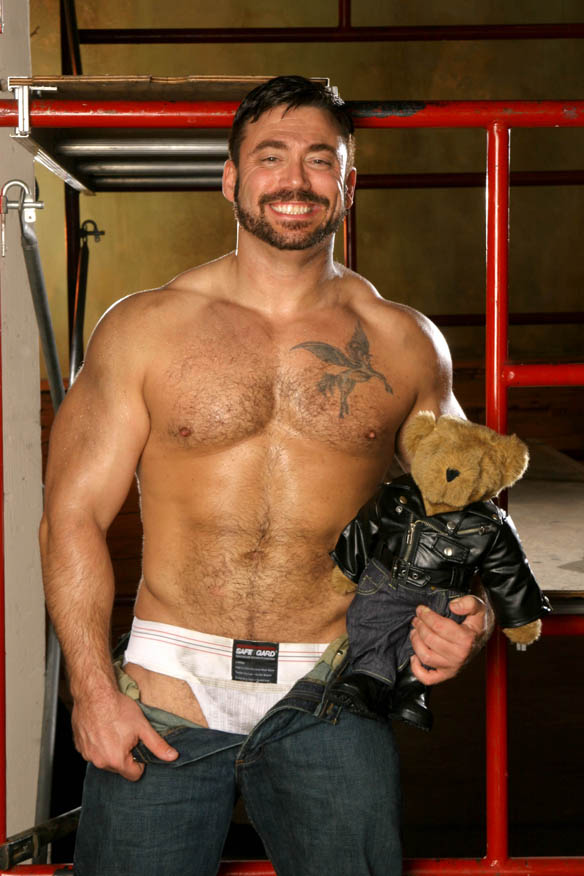 We met a porn star named Mick Powers from Columbus Ohio. He had just starred in Centurion Muscle 2, SWAT and ButchBear Studio’s Muscle Bear Truck Stop. He likes short guys. A lot. “Because you can just pick ’em up!” Which he did: he picked me up much to Ron’s delight. He asked Ron if he had his permission to flirt with me which of course Ron agreed (Ron likes when I get ogled because it increases my perceived market value). Mick lifted up my shirt to check out my chest and the started to kiss my pecs. I politely drew him off me (I think public nipple-sucking is gross) and then I told him if he liked my chest he should check out Ron’s smooth B’s. Which he did. He was a sweet guy and had a Vermont Teddy Bear dressed up in leather that Mick has had pictures taken with his different co-stars in his movies. He’s moving to Philly soon from Ohio – good luck Mick!

Eventualy we bade him farewell and then ran into a booth with Tom of Finland shower curtains. The guy at the booth joked that he bet my parents would be shocked if I had something like that in my shower – I said that my mom would be more fascinated in the screen printing process and image transfer.

This weekend is also when they host the Grabby awards for gay adult films with categories such as Best Group Sex Scene and nominees such as Desperate Husbands and 8 Simple Rules (for Doing My Son). Maybe we’ll go next year. They even have a category for Best Non-Sex Role – now that would be fun. What if I was the guy that actually did order the pizza?

The leather scene remains predominantly a white guy’s enterprise – a scattering of black men and maybe one or 2 asian guys in full battle regalia.

The funniest part of IML remains seeing these big beefy masculine men in leather and tattoos come up the escalator and then they see somebody they know and immediately drop into ‘Girl! How you doin’? I haven’t seen you in so long!’

It is later and I don’t hear the rain yet.