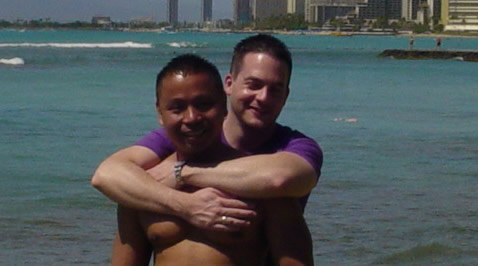 We came back and crashed. Got up, showered and changed and then went to Hula’s where there was a Volcano-associated event. It wasn’t the opening-night party – but I think a bar sponsoring the night for those that didn’t get tickets to opening night. The bar was a very mixed crowd – lots of out-of-towners and everybody dressed up in different versions of what they considered bar-clubbin’ gear.

A guy named Stephen came up to us and claimed to be psychic telling us that we were a couple (obvious: I was rubbing Ron’s back at times or holding his hand), that we’d been together for 3 years (this was a good guess), that I was from the midwest (again, I think kinda obvious- most of the guys there seemed very West Coast), that I was conservative (have you read my blog?), that Ron was from a war-torn country (again, obvious: Philippines, Vietnam, Cambodia… what Southeast Asian country hasn’t been war-torn at one time or another – he was guessing Ron was from Cambodia) and that I shouldn’t demand monogamy in a relationship. Stop right there! He was telling us all about the folly of applying heterosexual values to homosexual relationships. I countered that I thought monogamy was a very essential foundation if you were going to raise a family. He was totally taken aback that we had thought about raising a family. He admonished us as being a cute couple and then went his Mary way.

The bar was pretty boring – there was a heavily inked up guy stripping with one of those sock-G-string things that I always find so repulsive. The music was alright. 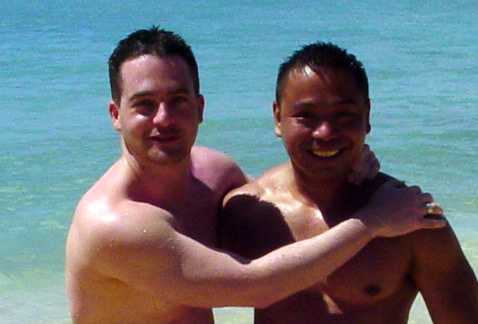 We ditched the place and went to Angles – Ron and Gilbert’s other Hawai’i haunt. Angles was an ever more muted crowd. The highlight was a combined club mix of ‘Phantom of the Opera’ and ‘All I Ask of You’. After an hour or so we retired. 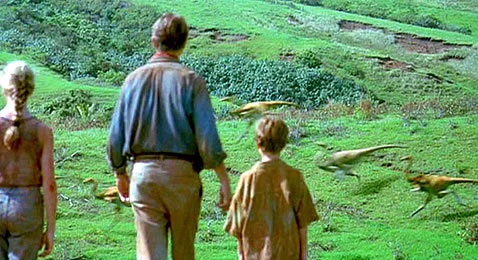 I had heard much about Hawai’i’s massive draw to Japanese tourists and I do have to say that line from Jurassic Park: ‘Look, they do move in herds.’ Waikiki has welcomed them by adding Japanese language to signs and menus as well. 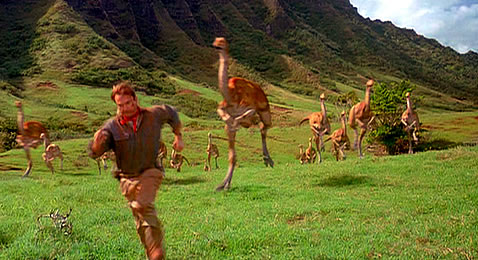 The best is the posses of teenage girls who are dressing in that weird schoolgirl-Anime style with mismatched clothes and chemical-burned hair. And they don’t stop giggling. Ron continues his crusade against poofy haircuts in asian guys and wishes he had a hair trimmer to get these guys into shape.

And the ABCs. I’d heard about the ABC but there really is a store on every block. You think people are joking but it is really true.

We stopped off at McDonalds on the way home – I got a salad to get some fiber into my life and Ron got a burger with a side of pineapple. Much has been said about McD’s rumored spam burger for breakfast. They also have the McTeri menu which is a whole set of Teriyaki-flavored offerings.

The density of Waikiki amazes me. The shuttle driver said 80% of the state’s population lives here. It is sort of like they offer up this island as the sacrificial tourist playground to keep the other islands quieter. I always find a disconnect between the adverts of a beach destination (quiet solitude and moonlit walks) with the real McCoy. I don’t think we’ll have time but I’d love to go hiking in the mountains.

We may be going to the Volcano party tonight – it’ll be my first circuit party ever. Ron was remarking how the whole circuit party phenom is slowing ebbing (Joe My God commented this last week). I’m guessing it because the generation that started the parties is starting to age – that along with the recession – and the increased expense of producing the events. I’m a big theatre dork: I’m really looking forward to seeing all the production values of the party. That is something I always thought would be fun – to be a producer/director for an event like that.

I’m hoping I get to see a Cher. The Chicago clubs will boast a wet-boxers contest or what-have-you as hosted by ‘Chicago’s very own Cher’ – a drag queen that does look just like Cher. Ron and I theorized that ever big city has its own Cher.

I can’t stop thinking about work and money while I’m here. I have a whole bunch of things that I’m building out in anticipation of my 30th birthday. The blogging ebook is 99.9% done, I am 2/3rd through a first draft of a podcasting course, and the RSS course languished but would only take a few hours to get finished. Plus, I’m working on a bunch of other collaborations. Michael has always chided that it isn’t a real project unless you’ve got a partner – that working by yourself ultimately sucks. I kinda agree though I am sometimes too married to my own auteur theory – but I’m partnering with a few people on some new stuff as well. I don’t see my 30th birthday as a bad thing at all. I think it is so ridiculous when people are coy about their age – especially men – that is just so damned girly. Who cares?!! It gets better every year.