Skip to content
Alrighty it is time to write a blog post. I’ve been particularly negligent of my writing since we moved to San Francisco but have been trying to not guilt myself too much about that. But eventually you feel the anti-creative plaque hardening in my writing arteries and know that you have to gobble some mental oatmeal to get it all cleaned out.

We went to the 25th Annual Folsom Street Fair. I was surprised it is only for one day, it is on a Sunday and only lasts 7 hours. There were thousands of people though. One highlight included seeing a guy pop his load out of a second story window. He had on a hood and a jackstrap and was jerking his cock slowly as the crowd cheered, transfixed. He started to gush and the thonged throng went apeshit and then the big moneyshot – presumably sprayed on the eager mouths below – and much cheering and clapping.

We had seen a similar second-story load-popper during the Dore Alley festival. Ron would later deduce:

We’ve only been in San Francisco for 6 months and we’ve seen two guys pop their loads out a window. That’s an average of every three months.

We’ll have to be more alert come December.

Folsom was fun. I got to see pony-play for the first time live and some furries. Some slaves pulling rickshaws. Several bondage and whipping demonstrations. 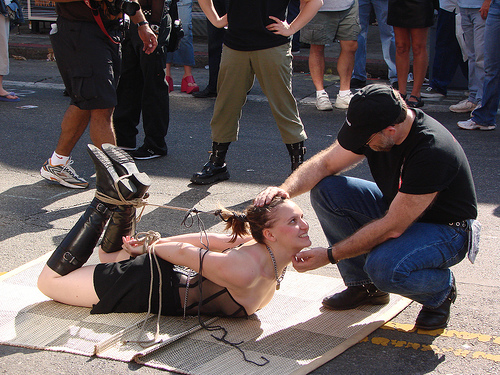 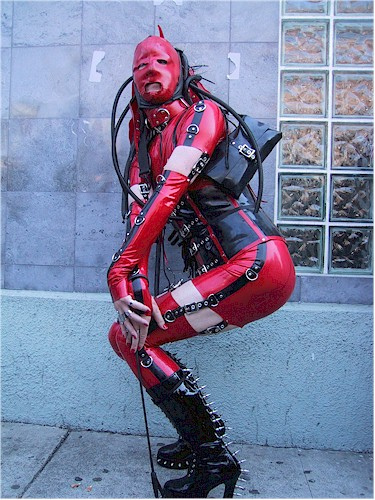 I guess this stuff doesn’t seem that subversive to me anymore. On the way out we saw a guy blowing another guy and I thought: ‘Yeah, you’re so rebellious. You’re doing this against the Corona truck.’ 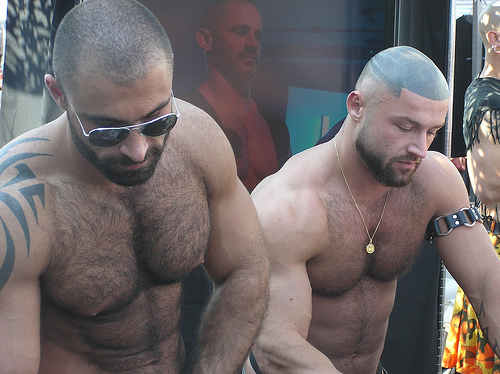 It seems the women at Folsom are much more creative than the men.

Leather daddy usually boils down to chaps and straps but many of the women were decked out in all manner of corsets and finery.

One group was in their best Merchant-Ivory period wear with linen suits, dresses and parasols and called themselves the Prim & Proper Queer Tea Party:

All with a potpurri of pot smoke, sweaty leather, lite beer and chicken kabobs. 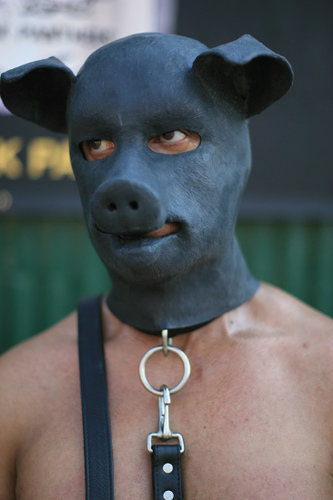 What I always find fascinating about the leather/BDSM scene/lifestyle is the amalgamation of biker chic, cowboy, Victorian age, Inquisition, punk and uniform fetish into a testament to the centrality and/or frivolity of sex. The over-sexualized, hyper-masculine style is aggressive at times, playful at others. Everybody gets to be fuck-able.

I didn’t think we’d be there for five hours so I didn’t slather on sunscreen. Six days later, I’m almost done peeling.

More conservative folk think that this is what San Francisco is like every single day of the year and that there are children walking around being traumatized. I only saw one person underage and it looked like a mom and kid that had taken a left turn at Alberquerqe and she told her daughter to look down while they made it through the crowd.

We did see the Sexiest Silver Fox in San Francisco again. Ron and I saw him on the train a couple months ago and I was entranced – sexy, silver and inked up. We see him every few weeks and here he is at Folsom: