Skip to content
(Saturday morning) It is 8:12 in Hawai’i. Ron is still snoozing away. I am, of course, still in Central time so it is noon for me.

I don’t think I’m cut out for air travel. I find it totally exhausting – and not because of the time change. It just seems like the whole process puts a lot of stress on your body.

We were up at 3 yesterday morning to grab a taxi by 4 to get to the bus and to the airport for a flight at 6:30. The good thing is Ron flies free and my ticket is deeply discounted. The bad thing is, it is a standby flight. So we aren’t even sure if we are going to get on. 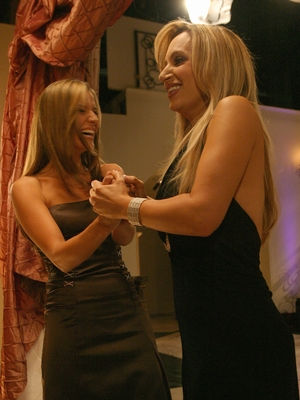 It is like a mini-version of The Swan where all the real passengers are boarded and all that’s left is the rest of us standbys – eagerly waiting to hear our names called. Ron had even mapped out if we missed the flight to LAX we could grab the next flight to LAX or even to Denver and then to Hawai’i (the direct ORD to Honolulu flight was packed so there was little chance of us getting on it). He kept calling me all night with new scenarios to try out – I basically didn’t care which way things happened – we were at the mercy of UAL.

But our names were called and we were the last two passengers to get on. All the way. In the back. Where you can’t recline your seat. I slept most of the way to Los Angeles. Once at LA we had a connecting flight in a different terminal so we hauled ass to that gate and then did another standby waiting game.

Sidebar: If I’d had a passport we might have dropped the Hawai’i plans and gone to Amsterdam instead. I could be face down in a hash bar right now with a sex show onstage in front of me. But like all God-fearin’ Americans – I only know one language and I don’t have a passport.

Our names were called and we boarded along with a Hawai’ian family with two of the cutest little girls you’ve ever seen in your life. They slept like rocks the whole way there. There mom had packed them tightly into their seats with pillows and blankets and apple juice and other maternal niceties. I tried to be precocious but she just ignored me.

We were in Economy Plus for the flight to Hawai’i so I was able to recline somewhat and Ron revealed the stash of snackies he’d stowed in his backpack. I think the Pepperidge Farm Sausalito (chocolate chip + macadamia nut) lasted a whole 20 minutes.

You’ll notice that I’m spelling Hawai’i with an apostrophe – evidently that is how you are really supposed to spell it – and prononuce it. I think in Indiana we prononuce it Ha-why or Ha-why-yee – but it is a full glottal stop on that last vowel – and a schwa for that first one.

The flight was long and I had a window seat but the window didn’t line up with my seat so I wasn’t able to enjoy the vista.

The first thing I notice stepping off the plane is the air. There is something about ocean air that is immediately pleasing. The humidity, the slight salt and the blowing wind. Whether it is South Carolina or the few times that Lake Michigan produces a similar effect, that ‘beach air’ always instantly calms me.

We get on the shuttle (not the Wiki Wiki) to Waikiki to check in to our hotel. The driver talks and talks and talks about Hawai’i and what we can do and where we can do. Actually – very professional and friendly – but we were both starving and the purser on the flight had given us an entire Discovery Channel narrative as we approached the island.

We get into the city and check in to the Ohana Hotel Malia. This would be considered a cheap hotel. There’s no cable, no internet, generic soap and little else. It isn’t dirty at all – just bare bones. And in Waikiki, bare bones is $100 a day. It is no Econlodge – we are on the 16th floor and have a great voyeur’s paradise of peeping available.

One reply on “Flight to Waikiki”