I am no means some sort of club music aficionado and ‘real’ circuit queens probably think my taste in music sucks. I find mixes I like and drive them into the ground. Here are my favorite dance mixes of 2015:

If you’ve ever been at the start of a set where the DJ builds this almost unbearable tension leading to this crazy release where the whole fucking club explodes, you’ll love the first 90 seconds of this one. Gomez always starts a mix with an overture of several familiar hooks (including a woman cooing You drive me crazy. Never let the party stop.). He builds it higher and higher and more manic and denser and then just slams down the bass and tears your face off.

Every time I get someone to listen to this their eyes pop out of their head with the first release:

Ivan was probably our biggest discovery this year. Be sure to listen to all of his tracks on SoundCloud.

Jack Chang, Live in San Francisco at 1015 Folsom, May 2014, produced by Gus Presents

Yeah I know – it’s from 2014. We were actually there when Jack blew up 1015 Folsom with a mix that I listened to for over a year and half after the damned event. And I gotta hand it to Jack: he releases epic multi-hour sets showing his mastery at the decks for hours upon hours. We have a couple of his 5 and 6 hour sets from the Berlin sex parties that are positively transcendent. Also got to hear him spin at IML in Chicago last May as well. Adore him, love him, and am so happy to watch his career take off over the last several years. Jack and us at IML: 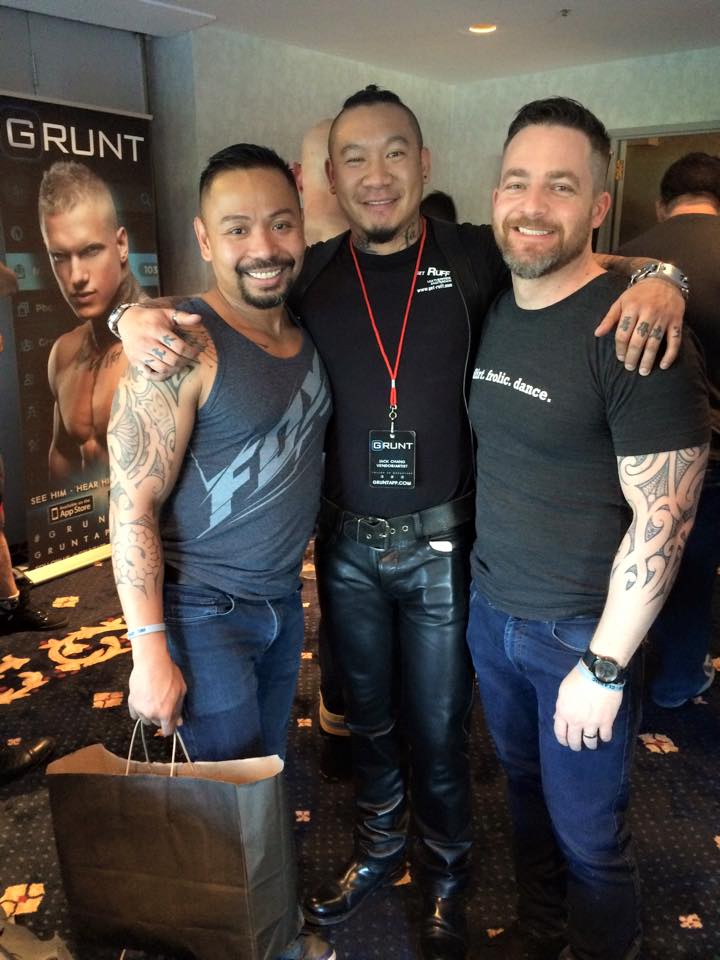 Best places to start are at:

Oh the whole fucking thing is amazing go listen to it for a year over and over again:

Bonus: He re-released some of his old mixes like this 5-hour mix from Folsom Europe’s PiG Berlin party.

Let’s be honest: Offer Nissim is out of his mind. Over the top. Crazy. And eventually you surrender and you love it. Ron and I went to the hear him at XOXO’s Klubberdome event and everything about the evening was so sharply produced, so expertly crafted, the visuals – the music (including an opening set by Misha Skye) – the vibe. You just have to give in and say, “Yeah okay, he’s waving his arms like a conductor and I’m going to just roll with it.” And it was a stunning evening.

More dense layers and motifs tumbling together. Best part at 14:49 with “Werk Me”, “Twisted Jack”, “Bounge Drums” falling over eachother

Ron and I were at the vendor market at International Mister Leather in Chicago this May and ventured into the booth for sex-goods purveyor Ft. Troff. They had a DJ just for their big room that was spinning a hard minimal techno sound. He was a beautiful black inked muscle god with nipple rings, a sly smile, and hypnotic hips. 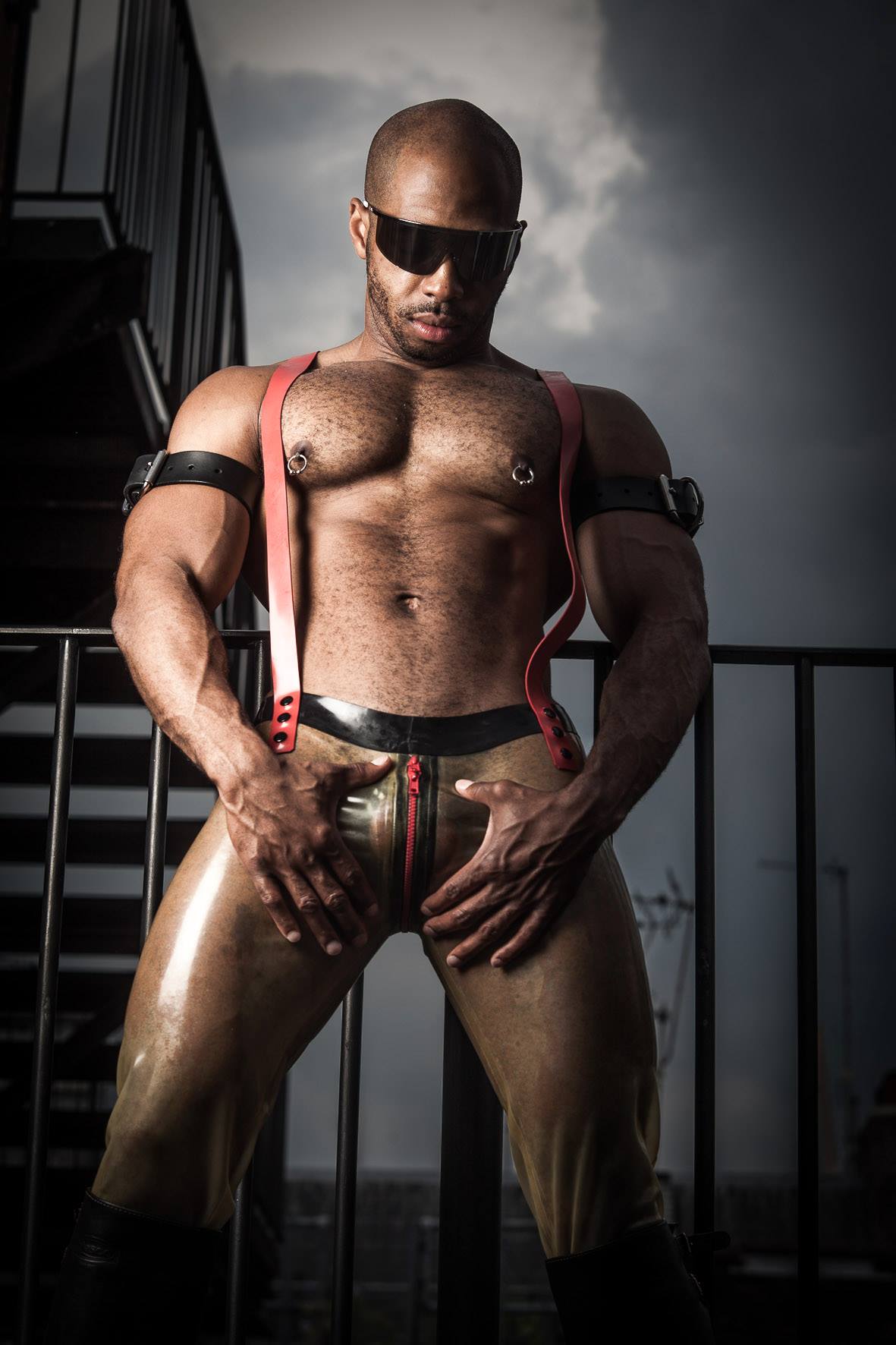 His name is MF3. Ron and I kinda stood there mesmerized. He was kind enough to give us t-shirts and CDs of his music and we’ve been listening to his music ever since.

He has a full arsenal of techno tracks on Mixcloud keeping alive a Berlin-inspired ‘real fucking techno’ sound.

And he was in town a few days in August and we got to have dinner. His DJ persona is cocky, confrontational, and sexy as hell, but in real life he’s a total sweetheart. 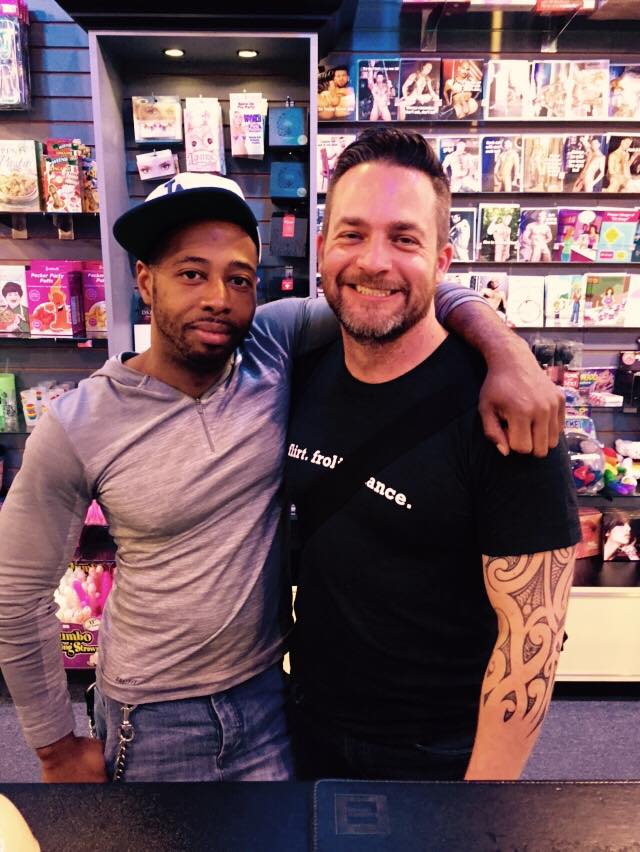 I’ve been lucky to be one of the hosts for the Brüt leather dance party for Halloween weekend here in San Francisco. This mix from their Folsom event is great set of Dan Darlington‘s take on steady-state deep house. Favorite parts are “This Is My Bassline” at 12 minutes, and a warm purring mix of “I Just Want to Spend Time With You” at 34 minutes and then the magic that happens at 42 minutes in – oh hell just listen to the whole thing:

I don’t have his mix but if there’s one DJ that is consistently amazing every single time we see him, it’s Abel Aguilera. His Aftershock afterhours party on Folsom weekend is always a stunning event starting at 4am. All the guys that wanted to hookup that evening are already back in their hotel rooms getting it on so everybody is there to dance and enjoy the music. Then at 9:30 we stumble out of the club into the daylight, questioning our life choices and how much sleep we can get before the street fair. Abel comes the closest to alchemy of any DJ with small tweaks and little call-backs that give the music multiple layers of depth and phrasing. When he cranked up Thomas Gold’s classic ‘Sing2Me’ (I think mixed against Madonna’s ‘Miles Away’) he changed merely one sixteenth note in the hook and it completely changed the feel of the song and it felt like the entire room was galloping in unison. He also did some transformation of that ‘Voulez Vous’ remix that also had us all writhing. Ron and I danced up on the catwalk most of the night and seeing the crowd from above and layers of lasers hovering above their heads made for an oustanding late late night and early early morning. Abel also plays the ‘big gay leather Christmas prom’ Black XXXmas party produced by Gus Presents and IndustrySF each Demember. He hasn’t released any of the 2015 mix yet but here’s some of 2014:

Over a year old but this mix captures that 4:30am feel where you feel untethered from reality. Our favorite part starts around 38m (super awesome at 41m) in but the whole thing is fantastic:

A close second is podcast #34 from One Magical Weekend.

One of the best surprises of the past year in the SF club scene was the debut of Sunsation Sundays, taking advantage of the rooftop deck at the new Oasis space. It’s a tricky event blending Sunday Funday cocktails on the roof and tea dance music on the floor dropping into a more circuit sound as the evening progresses – all on a school night. Their packed debut featured Dan DeLeon’s restless prime time high-energy sound.  Favorite part starts around 9 minutes in with a manic mix erupting with some diva pleading to know: How many muthafuckin’ latinos are in this mutha-fuckin’ house!? A lot, girl. There were a lot. Since Sunsation, the production team has added a bookend event called Pulse for holiday weekends taking you well into the night.

I’d be remiss if I didn’t include one of our other favorite events of the year, the notorious Real Bad party that closes Folsom weekend. We know many of the people on the production team and the peak experience with video describing the various kinds of love and fetish while rotating LED screens spelled out L-O-V-E. An overwhelming evening. Jesus De Pelayo executed a perfect blend of tea dance taking you into a darker evening mix while Brian Maier spun the underground basement space with a more downtempo but still strong sound.

Phil B and Philip Grasso, Bay of Pigs, produced by Folsom Street Events

And some of Philip Grasso’s set:

As a circuit girl friend once said: “Oh my God, Grasso just comes up with this shit and you’re like where the fuck did that come from? You aren’t old enough to know that song. Grasso knows how to turn my pussy out!” 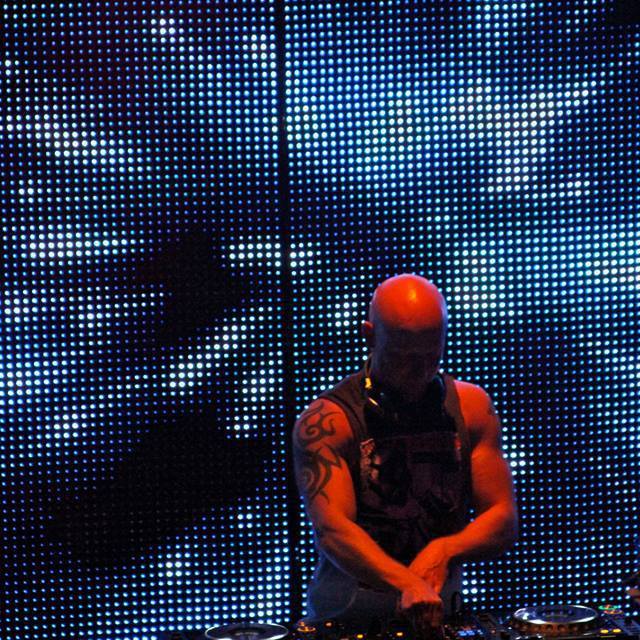 I was on the production team for PLAY T-Dance this past year so I’m a little biased but PLAY remains the best tea dance in SF, taking you from the dirty, aggressive, overt mood of Up Your Alley street fair and into an evening with an optimistic, upbeat, playful vibe. Even after midnight, the crowd simply would not leave the floor and when Russ finally wound down the music the crowd went beserk with applause. Here’s part 2 of his mix: 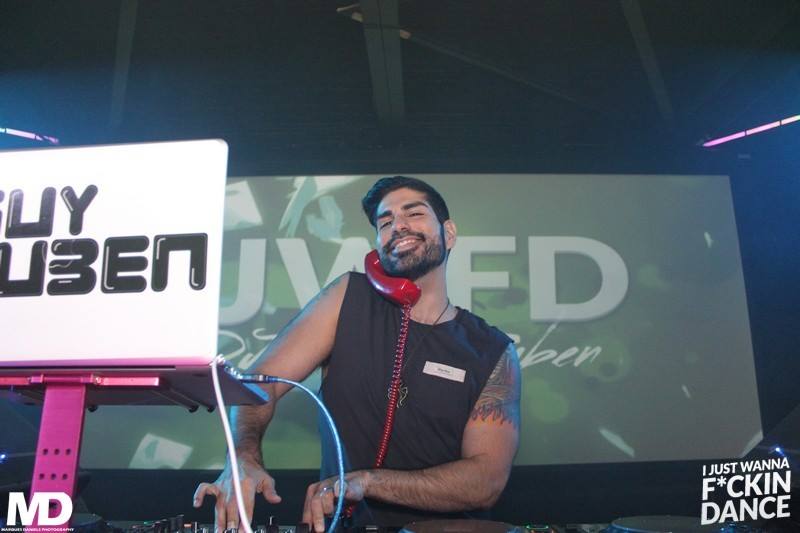 And while not circuit music per se, I’d have to callout DJ Guy Ruben for his hard rumbling underground sound he brings to House Party at Powerhouse every Second Saturday. It’s a hard balance to strike to keep the music ambient enough that bar patrons can chug Fireball, chat and grope in the front while keeping the beat restless enough to keep the shirtless muscleboys bouncing in the back. I seriously don’t know why the wood floors don’t collapse into the basement each time we’re all back there jumping up and down. Here’s some of his mix from Locoya Hill’s I Just Wanna Fuckin’ Dance event:

I swear I had the track for this one on one of the sites but can’t find it. One of my other favorite music moments of the year was Russ and Philip doing a giddly giggling tag-team set at Oasis. They mixed several mixes of Thomas Gold’s Sing2Me into one long 20 minute journey. It was fun seeing them take a creative risk like that and totally pulling it off.

While thousands of men danced at Folsom’s Magnitude event in the cavernous  Midway space,  DJ Bugie spun a more relaxed downtempo set in the outdoors chill-out space under gas-powered heaters and lounge furniture under the open night sky. Here’s a sample of Bugie’s podcast on Podomatic.

I first heard this mix at one of the Brüt parties here in San Francisco at BeatBox. Nice steady, hypnotic beat. When James Torres passed away over a year ago, the music scene lost a master.

You can always tell when a DJ has classical music training. There’s something about the way they fit the songs and beats together that has an internal logic making the set a more coherent whole. Asheton Lemay’s pedigree as a symphonic percussionist is on full display in every mix he puts out. In this case, his set from last December was one we listened to many times before going out for a night on the town.

Also love his afterhours set from the same month.

Another luminary in the SF dance scene is Wayne G. He doesn’t release a lot of longer sets but when we’ve heard him he’s always astounding. One of his mixes from 2015:

Another fantastic set of Sunsation Sundays was Brian Urmanita’s opening set this fall. Brian is one of the handsomest guys in the entire city. Seriously, he looks like a goddamn Disney prince. His husband is almost as handsome. If two guys could have kids, they should be a government-mandated mating pair. Obligatory: 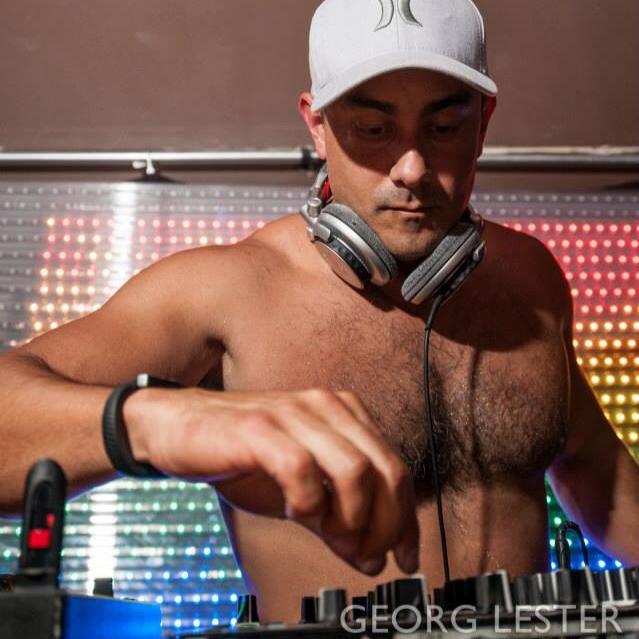 Anyway, his beauty belies his dirty take on house that he had on display at Oasis in August. He was also at the helm of Qbar’s Plan B event that ended a successful two-year run earlier this year.

DJ-folk, if any of the above is inaccurate, let me know!